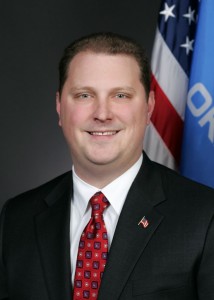 Office: (405) 557-7354
OKLAHOMA CITY – The state Supreme Court has ruled that the Ten Commandments monument must be removed from the grounds of the Capitol building.

In a 7-2 decision, the state’s highest court ruled that the monument violated a provision banning the use of public property to benefit any religion.

The court’s decision greatly disappointed state Rep. Jon Echols, R-Oklahoma City, who said he has every intention of working with the other House leaders to file a resolution for the 2016 legislative session that would repeal the section of the state constitution cited in this decision.

In the decision, the state Supreme Court wrote the following regarding how the Ten Commandments marker doesn’t violate federal law but does violate the state constitution:

Echols, an attorney and vice chairman of the House Judiciary Committee, said the issue lies with the state Supreme Court’s interpretation of the state constitution.

“After reading this decision, I understand where the problem is,” Echols said. “The state Supreme Court misapplied an archaic and progressive section of our state constitution and used that to apply a ruling that goes against the belief structure of the majority of Oklahomans. That’s why I plan on crafting a resolution for the next legislative session that, if passed, will send the question of whether or not Article II, Section 5 of the state constitution should be repealed.

“If the citizens will be faced with further decisions interpreting this section of the constitution in this manner, it is wildly inappropriate the judiciary or even the legislature makes those types of decisions for them. That power should rest with the people and their voice should be heard and they should be the final arbiter of this matter. I plan on filing legislation that gives them the opportunity to have their voice heard.”

Rep. Tom Newell, chairman of the House Government Oversight & Accountability Committee, said he believes action must be taken to remove the language cited in the decision.

“After this decision, it is clear to me and many lawmakers that this part of the state constitution needs to go,” said Newell, R-Seminole. “This provision of the state constitution is in conflict with the beliefs Oklahomans hold so dear. This monument does not violate federal law in any way, shape or form, as the Van Orden decision clearly states. That must be made clear: this is not a decision from the federal level. It is a decision from Oklahoma’s state Supreme Court and this decision goes against the U.S. Supreme Court. We need to change this section of state code, plain and simple.”

Rep. Randy Grau, an attorney and chairman of the House Judiciary Committee who has represented clients before the state Supreme Court, said it is important Oklahoma’s citizens are able to vote on this matter.

“Oklahomans deserve to decide this issue for themselves,” said Grau, R-Edmond. “The court’s decision is legally wrong and based upon a poorly written, discriminatory provision. Placing a repeal question on the ballot will save the Ten Commandments monument and allow it to remain on state Capitol grounds if that is the will of the people. The U.S. Supreme Court already allows such monuments and this is a matter of amending state law so it does not conflict with the decision of a higher court.”